Victorian Coach of the Year. 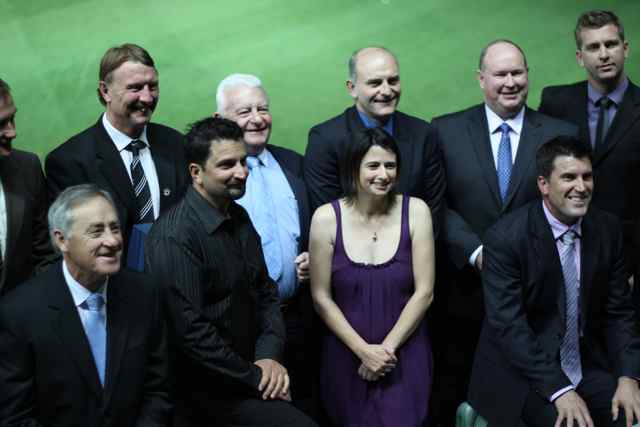 Friday the 5th of November saw the Victorian Football Coaching Association awards held at the MCG. Darebin Falcons AFL coach Peta Searle was in the running for the Victorian Female Coach of the Year. After what would have to be described as the best coaching record in VWFL history Peta topped off another great year with an unbeaten season in the VWFL Premier Division. She was pitted against 3 other coaches in her category, but when all things were said and done her 17 years in footy and her outstanding 6 years in coaching meant there really was no competition.

Peta won the award and in her acceptance speech was asked who she models her coaching style on, to which she said ‘nobody’, which shocked many of the audience including Stan Alves and Dean Bailey. Peta was able to share the night with her great support crew in Bev, Luke and Mandy, and her co captains from the year Daisy Pearce and Anna McIlroy.

Peta will not take the reigns again next year at the Falcons after accepting a position at the Western Jets as an assistant coach for their youth development squad.

All the Falcons would like to congratulate Peta on 6 fantastic years coaching and we all wish her the best with her new adventure with the Jets. We are sure she will one day coach St Kilda to that elusive premiership.