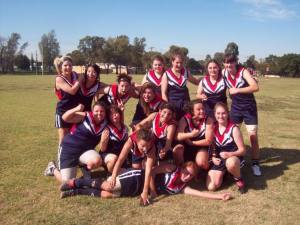 We are getting close to having a full side with only 3 girls out today! Unfortunately Keon Park only had 13 so we played with a bench for the first time. The first 2 quarters were tough with Keon Park playing good footy and making us earn every possession. The contest was tight and fearsome with both sides refusing to give in. Once we got the ball moving and kicking to space we managed to put a score on the board in wet and cold conditions. Our girls were pushed all the way by a committed opposition who were running out of players. With a bench we were able to stretch them even further and went in to half time with a 50 point lead.

Unfortunately Keon Park had to forfeit at the half due to injuries. We pooled all the girls together and finished of with a scratch match which was most enjoyable. Both sides were evened up and the girls had a ball playing against each other. This was concluded by some slip and slides in the deep end of the ground. With parents complaining of the conditions of their girls the Coach was nowhere to be seen!!!

Special mention to Sarah and Bonnie for their efforts in the Mud! And to Jess who did some of the best bench warming ever seen!!