VFLW Round 14 vs Port Melbourne

The Falcons went out in style for the final match of the 2022 season; under lights and in front of a big crowd at ETU Stadium.  Celebrating VFLW ’s Sir Doug Nicholls Round, the team wore Darebin’s inaugural Indigenous jumpers, designed by artist Rebecca Bell.

A close game for most of the match, Port Melbourne led all day, but the Falcons came out strongly in the last quarter.  Unfortunately, Darebin were left 2 points short, and unable to finish the season with a come from behind fairy tale ending.

Emblematic of an extremely disrupted year, coach Kate Tyndall, and players Ruedin, Caddy, Mifsud, Normington Dickens were all out with the COVID health and safety protocols,  A hand injury also prevented the leading ruck, Sally Lynch from taking the field.  The club’s experienced Shevaun Hogan stepped up into the head coach role, and the squad’s depth was again impressive, as more club youngsters were put to the challenge of playing a role at the state level competition.

The Falcons started the game a little tentatively, but the defensive lines were holding up well and clearing the ball out of danger.  Under pressure, not being able to capitalise on our chances, created the opportunity for Port Melbourne to score the first goal of the game.

The Falcons were able to respond with some better linking play.  In the ruck, Sabine Cowley du Parquet battled hard against taller opposition, and the Falcons midfielders looked to win the all important clearances.  Nic Callinan read the ball well off the ruck tap and was able to send a kick to Emma Mackay on the run.

Wheeling against the boundary, Mackay kicked in to the hotspot, where captain Steph Simpson was leading up beautifully.  Crashed by defenders, Simpson hit the ground and the ball was sent out again.  But only as far as du Parquet, who took a nice intercept mark on the 50 metre mark, and passed in Mackay.  Mackay once again sent the ball into that forward hot spot where Katelyn Hazlett this time got her hands on the ball, and was driven into the ground by her opponent.  With the free kick awarded, Hazlett was able to go back and get the Falcons first goal of the game.

Darebin looked to control the game with good ball movement and structures, Port Melbourne were more frenetic and created a lot of attacking pressure, resulting in a goal in the second, and another goal in the third, keeping the Falcon’s from scoring. 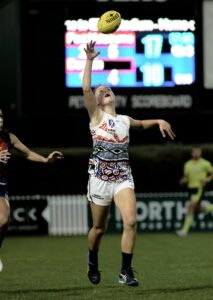 Facing a 14 point margin at the final break, Coach Shevaun Hogan gave the group some stirring words at the third quarter huddle.  Falcons brought some renewed intensity at the packs, and started to get more run forward.

At the 14 minute mark, a chance was created at the stoppage.  Hazlett charged in collecting the ball and several opponents, then popping it clear for a well timed swoop in for Mikayla Plunkett.  Plunkett then found Mikayla Meyer in space on the outside with a neat handball.  Meyer ran in and kicked a lovely long goal over a vacant goal square.

The Falcons were up and about, working the ball well into the forward 50.  Leading up well, Simpson was unlucky not to be rewarded with a free kick as her opponent came over her shoulder to spoil the mark.  Mackay worked the ball forward with a clever little handball in front of herself and then another clever little handball back behind herself, finding Vanja Smiljanic.  Smiljanic sent it again into the hot spot.  This time it was Nic Callinan contesting in the pack, with the defenders forced to reach over the shoulder to contest.  The free kick was paid, and Callinan was able to bring it back to just the two points.

But Port Melbourne were motivated by the home crowd and keen to finish their season on a high.  With some experienced players working the clock, the Port Melbourne held on for a two point win.

Coach Shevaun Hogan said it was a special game on the weekend for the Falcons. “The girls had the opportunity to run out in our first Indigenous jumper that was beautifully designed to celebrate indigenous culture as well as the story of the Falcons.  The message to the girls was to enjoy the last game of the season, and play the style of football that we have worked all year to achieve. They definitely did both.  The last quarter fight-back really showed the heart within this group.”

Keep up with the VFLW finals through the 2022 VFLW app