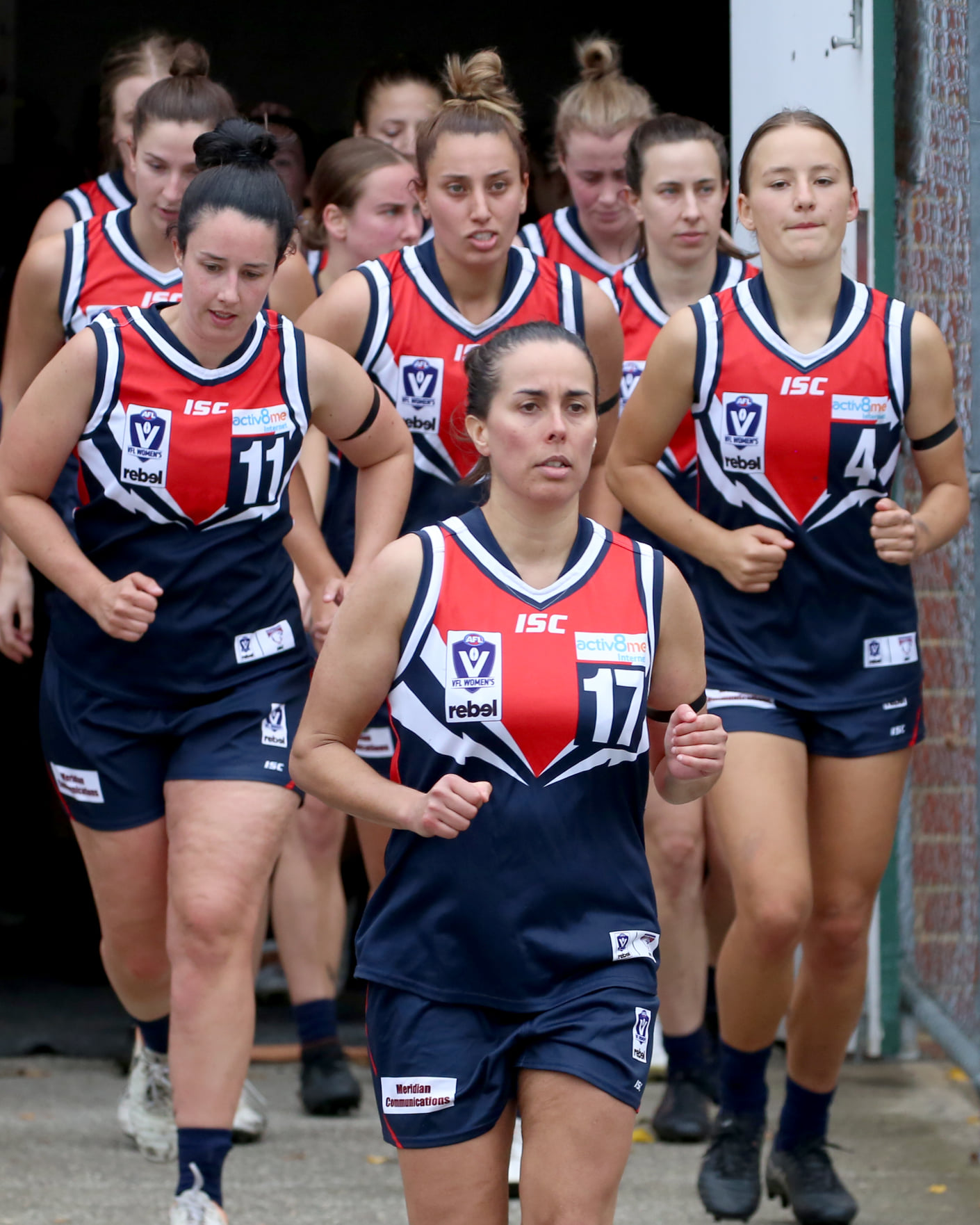 VFLW Round 13 vs Hawthorn

Darebin took on the in-form Hawks this week, but despite some really positive play, were unable to match the pressure on the scoreboard.  The Falcons did switch on from the start of the match and used structure and intensity to keep the Hawks pinned down.  This saw ten inside-50’s in the first quarter.  For the next three quarters, the Falcons only managed eight more inside-50’s as the pressure continued.  Hawthorn showed that they can punish any mistakes or low intensity, including four goals in the last quarter.

The Falcons were determined to build a better performance than the Round 3 game against Hawthorn, especially in executing skills under pressure.  In the first quarter, the team ran hard to put pressure on the ball carrier and the options, forcing some more risky play as the Hawks looked to switch play.  Nic Callinan was in everything with 5 kicks in the first quarter, as well as Mia Haas and Gena Lawson-Tavan with 3 kicks each.  Under pressure, the backline tackled well and found team mates by hand.  Good running options were created by Emma Mackay and Mikayla Meyer in her milestone 50 game.  Keeping to the structures, the team was able to find good options when the ball was turned over.

Late in the quarter, Emma Mackay found a bit of space to run through the middle, and look up for the forwards to make a move.  Alyssa Mifsud got some good separation from her defender, and went up strongly for the mark, with the defender caught out of position and without eyes for the ball, giving away a free kick.  15 metres out, on a slight angle, Mifsud went back and kicked the first goal of the game.

The second quarter was played in Hawthorn’s forward and the Falcon defenders were under pressure.  With a goal at the 13 minute mark, Hawthorn got some momentum going and put on another three in the last five minutes.  In the third quarter, the Falcons were able to hold the defensive line well, but were not able to put enough depth in the attacking play.  Hawthorn added one goal again in the last five minutes of the quarter.

The start of the final quarter saw one of the best plays of the match.  The Hawks midfield had sent the ball into their attack off the ball up, and set up players across the field to keep it in there.   Tannah Hurst brought down the forward in a strong tackle to create a stoppage.  Sally Lynch went up at the ruck and dropped the ball into Naomi Celebre’s hands.  Celebre kicked long to the wing.  The Hawthorn sweeper scooped on the ball and looked to switch it across the ground with a looping kick into the middle to a loose player.  A flying Lulu Beatty came out of defence, leapt into the air and just lifted the ball up and over, running on to gather.  She kicked long and straight to the Falcon’s 50 metre arc, and hit up Steph Simpson, who was the first to react.  Streaming straight into goal, chased by 5 defenders, Simpson coolly took a bounce, then another, kept running in and kicked a goal.

Coach Kate Tyndall was down at the bench for the match, with lots of instruction and support for her young team.  After the match, she shared her thoughts.   “To play one of the top teams in the competition, I was just pleased that the team was able to play a Falcons brand of footy out there for good parts of that game.  I think that it shows the journey that we have been on this year.  We know that we need to get better at some things, and are looking forward to one more chance at that in our next game.”

Next week is the last round of the season, and the first time that Darebin will play in an Indigenous Jumper to mark the Sir Doug Nicholls Round.  Designed by Rebecca Bell, this artwork on this jumper reflects the club’s stories and place along the Merri Creek, as well as the girls and women standing together in their desire for all to be welcome and included, in community and in sport.