VFLW Round 10 vs Collingwood

Darebin had their work cut out this week with the 2021 minor Premiers Collingwood chasing hard for a place in the final. Despite playing some good footy, Falcs were unable to convert their chances, and were ultimately outscored by the Pies. The Falcons were boosted by the return of their captain, and introduced some exciting young players to VFLW level.

Collingwood were quick of the mark with a goal from the first bounce, and showed some clean ball movement in attack taking a 14 point lead at the first change.

In the second quarter, Darebin came back out with more intensity at the ball. The team was committed, running well and supporting each other. The ball spent most of the time in the Falcon’s forward, unfortunately with little result. At the 15 min mark, the ball was forced forward again. Mia Haas was lively around the stoppages, and managed to back away and sneak a kick forward. Nicole Callinan took a lovely juggling mark in the goal square, then going back to kick the Falcons first of the day. But in the last minute of the quarter, Collingwood kicked another to take the margin back out to 14 points at half time. 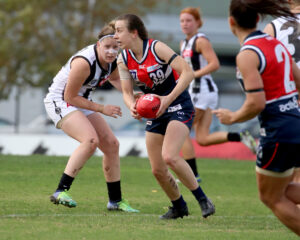 It still felt like the game was there to be won, and the Falcons started well in the third quarter. The backline repelled the Pies’ attack, and brought the ball down in a series of well-timed leads and accurate kicks. Lawson-Tavan to Blackwood, to McNiece, to Shone. Pinned on the boundary, captain Steph Simpson won a free kick in with some great attacking play, and sent the ball into Mifsud leading strongly. McAloon read it well off the back, finding Mackay at her shoulder with a good handpass. Mackay then able to reward the team’s disciplined work with a goal.

Some clever attacking again from Simpson set up another Falcon goal. Manaia Huta linked well with Simpson, sending the ball up the field directly and finding Katie McAloon. Sending it forward quickly McAloon put the ball just over the head of Millie Shone. Shone battled hard to knock it on, finally reaching Buckley, who kicked on to a good circling lead from Mackay. Taking the chest mark less than 10 metres from goal, Mackay was able to put that ball between the sticks and score another good team goal.

Unfortunately, the Pies were able to put through a few quick goals through Zander and then O’Dea, and the lead was stretched out to three goals at the final change.

The Falcons kept the effort going, with great attack on ball from Simpson and Cowley du Parquet, and some fearless tackling from Tannah Hurst. Mifsud continued to provide a strong target up forward, taking a nice mark early in the quarter but was not able to convert. The later stages of the game were all Collingwood with the momentum and the final scoreline was pushed out with another couple of goals.

With the NAB League completed and National Championships finishing up on the weekend, it was exciting to be able to see some of the future stars being introduced to their first taste of VFLW footy. These talent pathway competitions and programs take precedence over VFLW, including training and matches, and additionally players under 18 are restricted to a maximum of five VFLW home-and-away matches

Mia Haas played her second match, after finding some really good form with the Northern Knights in the NAB League. Playing for the Falcons in the U16 and captaining the Darebin U18 side, Haas is a strong and creative defender. This week she was joined by fellow U18 Falcons team mates and Northern Knights vice captains Tannah Hurst and Lulu Beatty. Hurst was selected for the Northern Knights for the last three years, and is building her game as a reliable, consistent yet innovative defender. Lulu Beatty is another Northern Knights defender, although she played out on the wing this week in her first game in VFLW. Beatty’s talent saw her selected for the Vic Metro U17s last year and U18s this year, and a chance to develop great leadership skills on and off the field.

With a tough run home against some of the higher scoring teams, Coach Kate Tyndall will look for opportunities for the squad to build on their game plan under pressure. “Yes, season ending injuries have provided challenges for us, however it gives others opportunities. We were disappointed with the scoreboard today, but it is clear that we have made progress since last year, and we are getting better. Our second quarter was probably our best, with the ball in our front half for a considerable amount of time, but once again, we weren’t able to capitalise on our momentum and convert into scoring opportunities. It is very exciting for our club to have three of our U/18’s now playing VFLW”.

Come down and see the team in action as the next match on Saturday 7 May.  Darebin will be playing Essendon at Preston City Oval, 11am.