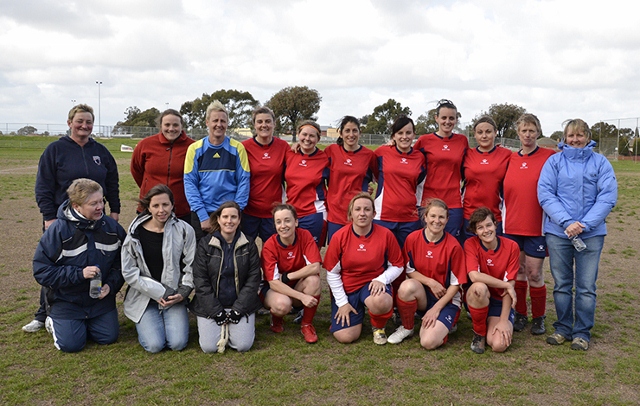 In the last match of the home and away season, the Falcons Metro team travelled to Fawkner and were hoping to better the 3-3 draw from their last encounter which saw a gallant display from the Falcons with only 10 players.

Conditions were blustery and captain Staci Timms won the toss, electing to kick with the wind in the first half. The Falcons had several chance to take the advantage through some great shots on goal by Irena Farrinacci, Kristen Tytler and Miranda Malanuik, but were unable to capitalise. Wind and drizzle soon turned to pelting rain and even a spot of hail but the Falcons solidered on, firing shots at the Fawkner goal. When Irena was brought down in the box by a Fawkner defender, the Falcons were awarded a penatly however were unable to convert it and finished the half having had all the attacking play with the scoreline at 0-0.

The second half seemed like it would be an uphill battle as Fawkner now had the wind advantage, but the Falcons’ attacking run continued. Coach, Tracey Hodge, made a few positional changes and the Fawkner keeper was again forced to make some difficult saves. However, in the end, the tiring Falcons were unable to find the back of the net and finished what has been a remarkable first season for the Metro Team with a 0-0.

Following the match the Best and Fairest vote count took place with Eva Kotsiras taking out the award and Kate Dullard named as Runner-Up. Well done to two worthy winners and fantasic team-mates.

The Falcons will be on the look out for any new or experienced women players who would like to join next season so if you are interested in playing soccer email Sall at [email protected] to register your interest.