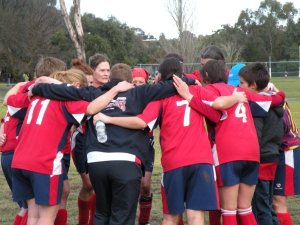 Darebin Falcons soccer team took on arch rivals Fawkner on Sunday determined to register a win after several recent loses against the Blues.

The game kicked off at a furious pace with Darebin mounting several dangerous, penetrating attacks. Sina, lining up for her first home match in a Falcons shirt (photo) started on the left of midfield and was quickly involved in the action; Sina latched onto an excellent through ball and slotted the ball home to give Darebin the lead.

Fawkner looked dangerous on the break and equalised with a controversial goal after the referee failed to spot a clear offside. With Ruth still unavailable Nicky pulled on the gloves and provided a confident performance between the posts.

Led by Brenda and Jasmine the Falcons solid and reliable defence continued to break down Fawkner’s attacks, with Sal outstanding on the left and relentless running from Staci on the right. Eventually Fawkner equalised from an excellent free kick taken from outside the penalty area which just dipped under the crossbar into the net.

The second half saw wave after wave of strong Darebin attacks and the introduction of Maria(photo in the rooms) in an attacking midfield role. A series of corners resulted in a fine headed goal from Maria who was immediately swamped by the whole team including Nicky out of goal!!

Kat, Beth and Sarah continued to provide a solid, hard tackling midfield display and Jo rattled the Fawkner side in a strong attacking display supported by the consistent El. The Blues lost their composure during the final period of the match and were lucky to finish with all 11 players on the field! One final poor tackle resulted in a penalty calmly converted by El. 4-2.

The Falcons were FanFalcontastic all day and sung the song with gusto and pride surrounded by supporters, family, and friends joining the circle.