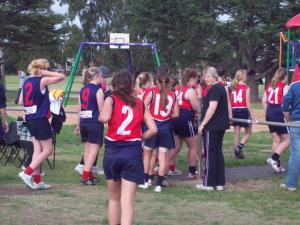 The Youth Girls side keep their undefeated status, with a big win against Jacana.

We had our back to the wall today with up to 6 girls out with sickness. The first quarter was a struggle with our girls throwing the ball around and most playing in different positions managed to keep the opposition scoreless. With both our ruckmen out several other took up the challenge with Gunners in particular playing well in the ruck and around the ground.

The second quarter was an arm wrestle with only one goal scored by our girls. Both sides were trying to run the footy. This quarter saw Jess come off with claret pouring out the hooter after a wayward elbow. Issi was thrown on the ball and together with Bree and Gunners worked hard at applying pressure and held Jacana scoreless.

The third quarter the grils started to roll with the familiar run and carry but more importantly sharing the footy. They insisted on giving the ball out to a team mate in better position. Jacana had no answer for this and the game was won with 3 great goals to nil this quarter.

The last quarter saw our girls (who were playing one short) run the ball and over power the opposition with smart footy to clinch top spot on the ladder. Great game by all today. If they continue to share the footy and run with their fitness they will be hard to beat. It was good to see girls play in different positions and apply themselves and go hard at the footy. Their willingness to protect each other with voice and body is great to see. The field kicking is getting better each week and the ball movement is now done with purpose and at time precise. Well done all.