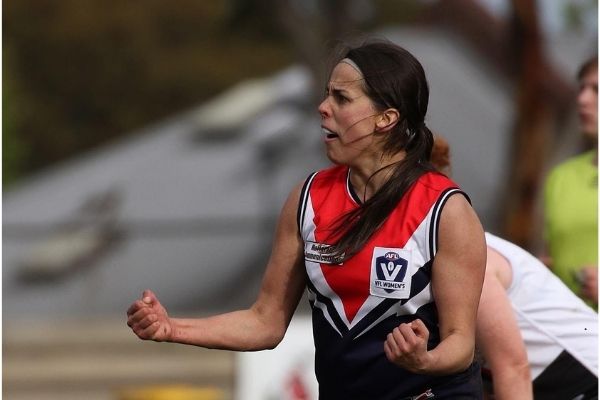 Steph first played Auskick, followed by junior footy with the boys for Warrandyte.  She played over 60 games with Warrandyte Junior Football Club and then was untimely kicked out at about 13-14 years old when girls were not allowed to play anymore. At a charity footy game In 2009, a couple of Falcons invited Steph down to training where she immediately fell in love with the club.

My first women’s game was played down at Plenty Park versus Diamond Creek where we had a hard-fought win in cold conditions. That day, I quickly learned about the intense rivalry between the two clubs and the tough team first brand of footy played by the Falcs. I also broke my pinky finger which kept me out for a few weeks.

Over the last 10 years, Simpson has been an integral part of the club.  An ever reliable and hardworking player, she was part of the Falcon’s famous premiership years, playing in the winning Grand Finals from 2009-2010, 2013-2017.  At national level, Steph has represented Victoria Metro for the AFLW National Championships, and was selected by Western Bulldogs in 2014 Exhibition Game.

My favourite thing about playing at the Falcons is definitely our Falcons Family! I love playing footy with my friends and I love that I get to share it with my family as well.

I cherish every premiership I have played in with the Falcs. I feel like 2017 was extra special being played at Etihad with a huge show of support from our Falcons’ family and it was also the last time that group was together! Playing football with Steph has been a great privilege. She is fierce and competitive on the field, committed and inspirational in the way she prepares at training and before games, but most importantly she is one of the great friends I have made while we have been at Darebin together.

I could tell many stories about Steph but the most memorable one has to be the winning goal she kicked against St Albans in the marathon overtime final.  She gave new meaning to the phrase ‘Golden point’ that day! Congratulations Steph on such a great achievement and enjoy the day. Steph was part of the Darebin Falcons leadership group in 2018 and was named captain in 2019.    Darebin Falcons Leading Goal Kicker in 2019, she is also leading the list for the 2021 season.

Steph is a very close friend and one of the best people to have arrived at Darebin (a very long time ago now!). On field she has the ability to turn a game and create something from nothing. Her smarts around the ground and support of all her team mates sets a standard for everyone around her.

Stepho also knows how to enjoy every moment both on and off the field which means she is one of the most loved people at Darebin. Always first to say yes to any social event and help organize anything to help bring the team together. As the VFLW Captain, Steph works tirelessly to continue developing women of all ages on and off the field. Congratulations on an impeccable 150! Thank you to Stephanie’s Player Sponsors in 2021