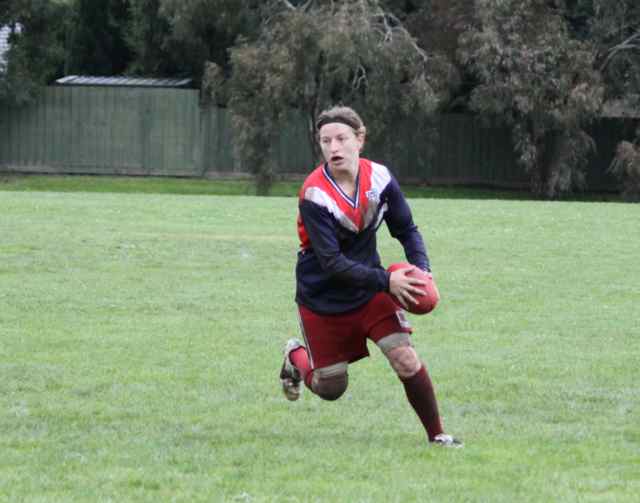 Round 14 – Darebin vs East Burwood

It was a great day for football at AH Capp Reserve. In a rematch of the 2010 grand final, the Falcons faced a hard slog for three quarters. The Devils were desperate, tackling hard and applying enormous pressure.

The huge crowd witnessed a great team effort with some fantastic performances from the home side. Gemma applied intense forward pressure, helping to create many scoring opportunities as well as her amazing in-and-under work, Zaharakis style. Matty kicked four fantastic goals, including her bend-it like-beckham soccer goal on a bouncing ball from waist height. Inspirational Tory was everywhere but always in the right spots, tapping the ball forward and setting up goals.Trashby’s grit and composure in the contests was first class as always and created many scoring opportunities. Tilly’s enormous smothering arms were on display again and again and again.

The last quarter saw some very efficient ball movement especially out of the middle as the Falcons clicked into top-gear in the last quarter and played inspired footy. Norieul dominated in the ruck and the girls finally figured that if they got on the end of her big hit outs it was an easy ball out of the middle. After a tough battle, the Falcons kicked away to a convincing win.

Round 14 saw 2nd play 3rd on the ladder in what was the inaugural Catherine Wotton Cup, a fantastic initiative aimed at raising money and awareness around Ovarian Cancer and a scholarship for specialised Ovarian Cancer nurses.

East Burwood had everything to play for in an emotionally charged game at AH Capp Reserve and got off to a great start kicking the first goal of the game with the wind. The Falcons however quickly steadied, controlling the play and moving the ball confidently and keeping possession.  Aasta, in what was a best on ground performance, took a bag of marks across the middle and half-back, constantly chopping off Burwood’s offensive attack. Second gamer Rechelle managed a strong mark in a cluttered forward line and kicked truly.

The second quarter was a messier affair, the Falcons had the wind and were rushing the ball forward without much structure. East Burwood continued to press, and worked their way forward however the Falcons managed to sneak into half time eight points up.

After the break, Macca asked for more shepherding and blocks and to recover the composure lost since the first quarter. Burwood however, were still hungry as always and managed five scoring shots, luckily for the Falcons with only one going through the big sticks. Aasta kicked a huge goal into the wind and steadied the ship for the home side.

Only leading by five points at the final change, but with the wind, the Falcons manage to control the play again and gave the forwards more opportunities, resulting in Georgia kicking a couple of soccer goals to seal the win.