2022 was a big year for the Darebin Women’s Sports Club, getting all sports and programs back on-track, following a pandemic-impacted two years for community sports and clubs.

For the Darebin Falcons, the year culminated in what most clubs like to refer to as their ‘Night of Nights’ with the club’s Senior Teams Presentation Night last week, held at the beautiful old Thornbury Theatre.

It was a packed house, with those in attendance gathering to celebrate the achievements for both the footy and soccer seasons, with recognition and awards for coaches, players and many people involved in delivering these programs and in supporting the club.

The formalities kicked off with an opening speech from Falcons Club President Jane Ryan, who proudly 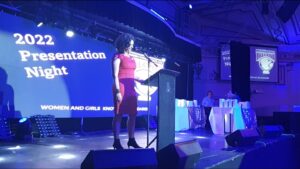 acknowledged the vision and ongoing achievements of the club with its recognised role as a leader in
advocating for further support for women’s sport, as well as improved access for girls, women and gender diverse people in sport.

As the first opportunity for our Club to formally come together since 2019, Jane also acknowledged our 30th Anniversary, with our 2020 celebrations waylaid by COVID-19. We launched the first phase of our Herstory page on our website, with a timeline of our major Club milestones, including links to our official 30 Year history, written for us by Siren Sport, based on interviews with Falcon stalwarts from across the years.

It was a special honour for those present to have so many of our Life Members, as well as players from the early 1990s such as Sal Rees, Col Vale, Marg Dishon, Linda Musicka and Sharon Hughes, join us for the night. Not to mention, four former Presidents – with Sal Rees joined by Trish Riddell, Rebecca Hickmott and Aleisha Leonard.

Being our first Presentation Night in three seasons, the evening also saw Life Memberships awarded to a further four very deserving members of the Falcons family, who have dedicated years of service both on and off the field and were lauded on the night for their achievements and commitment to all that the Darebin Women’s Sports Club stands for.

Aasta O’Connor – former AFLW player and four-time Falcons Premiership player, former club Treasurer and now U10 footy coach as well as Diversity and Inclusion manager with the club; and the dynamic duo of Maria Caruso and Davide Codini who joined the club as soccer parents over 10 years ago and have since gone on to successfully coach, mentor and volunteer across many aspects of the soccer program instigating many club and team initiatives.

Of special note was the recognition of Mereki Nieman as the Sal Rees ‘Club Person of the Year’. Mereki is not only a serving DWSC Board member of more than 3 years but also facilitates everything to do with the Falcons’ website and has courted sponsors and produced newsletters reporting across club activities and codes and much more, underlining a diverse contribution to so many aspects of the club.

She has also been busy leading the club’s Skills Acquisition Program for soccer as its Head Coach and has coached junior girls teams taking many players right through from U9s to U15s, taking them to finals.

As with most sports awards evenings, the trophy and medal presentations were interspersed with food, drink and much moving between tables to chat with friends and fellow Falcons, past and present.

A highlight of the evening were the two video messages from club legends Daisy Pearce and Lauren Arnell, who were both interstate due to their AFLW commitments – with Daisy still leading on the footy field for the Melbourne Demons and Lauren who, as the inaugural AFLW coach for Port Adelaide, continues to break down barriers in women’s sport. Both Daisy and Lauren contributed personal messages as to how the Falcons have contributed to their football careers and friendships, on and off the field.

Following the formalities, the evening wrapped up with much laughter and dancing, all in celebration of another year on the park, whatever your code, and with anticipation of an even bigger year ahead in 2023.

Stand Up and be Counted – Louise Moll

A special mention and recognition of 20 years in the game also went to soccer stalwart Brenda Lang.

And the Players’ Player award for both Division 1 & 2 in the NFNL went to Cam Williams – a great achievement.