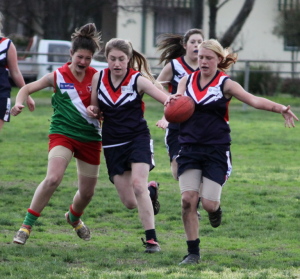 Firstly Darebin congratulate Rechelle McSwain, Bonnie Griffiths and Dani Iacobucci on being selected to represent Victoria in the 16 and Under Girls Australian Football Team at the School Sport Australia Championships in July, 2011. Well done and all the best to them.

The girls welcomed back Whitty for her first game this year and Bonnie for her first ever game with Darebin. With 4 girls taking the field under a sickness cloud and 3 on the sidelines with injuries all were nervous.

There was no need as the girls started very well. This has been one of the girls objectives this year was to improve our first quarters. They again came out and dominated the first 15 minutes and made a statement. Our girls all kept sharing the ball and were first in all day. This is obvious by the score line and our style of play which is not always rewarded. Apparently girls that arrive to a contest late then have the “courage” to just jump in willy nilly and pretend to fall on the player over the ball is given the benefit of the doubt and are regarded as a tough player. The only tough players out there last Saturday were the ones putting their head over the ball all day and everybody watching the game saw who they were. There was one incident in the pocket in front of all the Kilmore bench and supporters that allowed a so called “tough” player to show her toughness over the ball. We all saw what happened!

The first Quarter saw our captain Jess go down clutching her knee in a very fair contest. Unfortunately she took no further part in the game. The girls just continued along with some terrific passages of play. Our ball movement at times was perfect, lots of coast to coast work with a great kick to a lead in the hot spot for a good shot on goal. This continued all day and we finished with 9 individual goal kickers. New girl Bonnie finished with 4 and soon realized the more she shared the ball the more she was involved and continually gave of other opportunities which is a credit to her and her new team mates. All played very well but a special mention must go to Gunners. When on the ball she shepherded, protected and shared the footy. When at Full Back let nothing past and then kicked 3 great goals at Full Forward.

The song was sung with great gusto in the rooms and Bonnie getting a tad wet in the middle of the celebrations.

Congratulations to all the players and helpers on the day. Keep training the way we are and there will be no limits.