VFLW Round 9 vs Southern Saints

Darebin Falcons worked hard, but were ultimately unable to match it this week with the Southern Saints.  The squad commemorated some great milestones with 150 games for Paije Kearney, 50 games for Rachel Hibbert as well as a debut game for Mia Haas, but were unable to get the results that these moments deserved.

The Falcons were under pressure from the first bounce, and were unfortunate with 3 impactful injuries.  Talented youngster Mia Haas spent time on the bench with a suspected concussion, and seconds into the second half, Stephanie Normington-Dickens was taken from the field with the stretcher after a heavy clash at the ball up.  Rachel Hibbert going down late in the last quarter with a knee injury was also a huge blow.

The Falcons were well served all day by the athletic Nic Callinan putting the pressure on contest after contest, and in the ruck with Sally Lynch getting first touch of the ball and 27 hit outs.  Mikayla Plunkett and Ellen Buckley worked hard with running and tackling pressure, and  Gena Lawson-Tavan, Alice Caddy and Karly McNiece were also bringing the intensity to the contest and getting some good disposals under pressure.

In the first quarter, Callinan hustled well, getting the ball out into space, with Mikayla Meyer running hard and then sending it down into the Falcons forward.  The faster ball movement created pressure for the Saints defenders, and some good body work from Alyssa Mifsud led to the first scoring opportunity.  With a free kick awarded for interference, Mifsud was able to go back and kick straight through the big sticks.   The Falcons battled hard to meet the Saints intensity, but did let through 2 goals late in the first quarter.

In the second quarter, Saints again had more possession but some good scrapping meant they were only able to add 7 points.  The Falcons were only able to add a single point themselves, with a few missed chances, and were trailing by 3 goals at half time.  It was a very similar story in the third quarter with more arm wrestling. Saints adding another 7 points, Falcons only managing 2 behinds.

In the final quarter, the uneven time in possession (Saints 60%- Falcons 40% in the game overall) eventually led to the game breaking open, with a 4 goal last quarter from the Saints.

Coach Kate Tyndall was left a little frustrated with the outing.  “There was not a lot of happiness to report!  I felt our effort all day was commendable, but we do need more reward for effort” 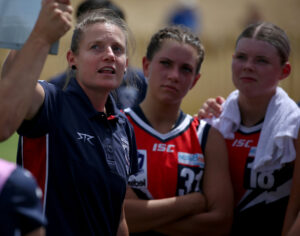 The upcoming match with Collingwood will be a critical chance for the talented Falcs to secure some important premiership points.