They don’t come much tougher than this. 150 games for Shevaun Hogan

Shevaun Hogan began playing football at 7 years old, starting out with the boys at Park Orchards. Shevaun was a founding member of the Eastern Devils in 1999 in which, during her time she won 3 best & fairest awards and earned selection in the Devils “Team of the Decade”.

Shevaun has built a reputation as a skilful backliner who plays tall, and has managed on many occasions to limit many of the VWFL’s power forwards goalless.

Shevaun made her way to Heidelberg, taking on the captaincy and was the top vote getter in the 2009  VWFL Reserves Best & Fairest. Unfortunately for Shevaun she was deemed ineligible to collect this award, due to Heidelberg’s relegation to the Reserves Division mid-season.

Shivers then joined the Darebin Falcons in 2010 winning her first premiership, and again in 2013 and 2014. During this time Shivers also represented Victoria at the National Championships in Adelaide in 2011.

Shevaun is a dedicated club member and committee member, doing more than her fair share around the club. She is also a passionate advocate for fundraising and research in MS, running many fundraisers over the years for the cause.

The Darebin Women’s Sports Club wish Shevaun all the best in her 150th game. Congrats Shiv! 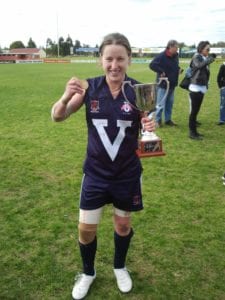