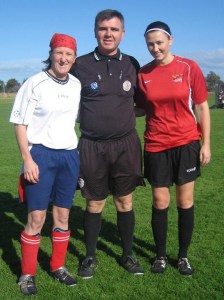 Click below for a full soccer report on Falcons Vs La Trobe.

The Falcons soccer team navigated their way to a wind swept field in Bundoora to take on second place La Trobe. Despite stand out performances from Nicky holding the forward line, Jo in an attacking midfield role and Ange as a skilled overlapping wing back Darebin went down 6 – 0.
The score line of 3-0 at halftime flattered the la Trobe outfit and Falcons came out firing in the second half; the pressure paid of and Darebin earned a clear penalty.Unfortunately the team were unable to convert and LaTrobe continued to take their chances.
There was no lack of effort and some neat passing football promised much for the remainder of the season.
Falcons take on Cairnlea at home next Sunday at 1pm.