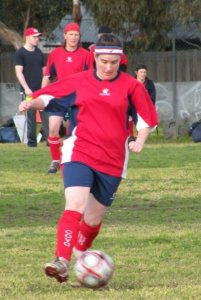 For scores from the Falcons games v Melbourne Bears and the Whittlesea Rangers, check the link…….

‘Going on a Bear Hunt’ Sunday afternoon saw the soccer-Falcons heading north on a Bear hunt, determined to return victorious! However Darebin were met by a ferociously determined pack of Bears desperate to protect their honey!! Melbourne Bears jumped the Falcons and scored an early goal. Despite one way Darebin traffic for much of the match and wave after wave of Falcon attacks the team were unable to score.
Sarah played her best game of the season and a healthy group of Falcon family, friends and partners gave fanfalcontasic support from the sidelines but couldn’t push Darebin to a win.
The score remained 1-0, but little can dampen the soccer Falcon spirit and Whittlesea will need to bring their A game to stand a chance next Sunday against a Falcon team determined to reverse a series of disappointing results! Darebin Falcons Soccer Team played at home this Sunday taking on Whittlesea, determined to stem the flow of recent disappointing results. With rain and hail threatening both teams were pleased to start the game in winter sunshine. A strong wind blew across the ground making attractive, accurate football difficult. Falcons adapted better to the wind and peppered the Rangers goal.Jo troubled the Whittlesea defence with excellent turns and tricky, snakey runs into the box well supported by Maria who consistently held the ball in the forward line showing tenacity and determination.The first half ended scoreless, with the excellent Darebin defence holding strong and Ruth coming off her line on several occasions to snub out Rangers attacking attempts. 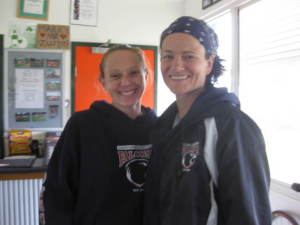 The second half saw further Darebin pressure with the game controlled by an excellent display of hard tackling and accurate passing from Carmen in midfield. The deadlock was broken in the first 10 minutes of the half when play was switched across field for Nadine to sweep into the box and slot the ball past the Rangers keeper to put Darebin one up. Despite Falcons continuing to attack Whittlesea managed to score on the counter attack to equalise. Falcons showed a never say die spirit and threw everything at the Rangers goal. A penetrating cross from Nadine missed several Rangers players , Jo attempted a horizontal diving header only to meet Ange sliding in to attempt to slot the ball over the line , both collided heavily resulting in a nasty ankle injury for Ange.
More exciting play resulted in another goal, Nadine crossing accurately for Carmen to rise and head home and was quickly swamped by a group of happy Falcons. The excitement hadn’t ended; Whittlesea earnt a late penalty for handball. Ruth stood tall and saved well to keep the score 2-1. The game ended in a desperate display of determined soccer. The Falcons were happy to hear the final whistle and very keen to huddle and sing the song with gusto…Fanfalcontastic!