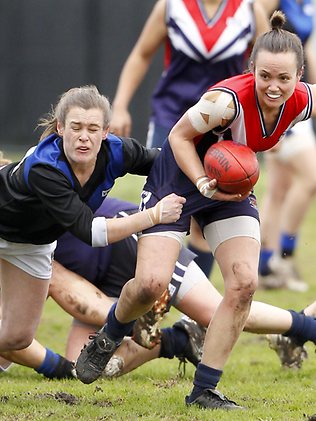 The Falcons had been truly tested in their last two encounters with the Mugars and expected another battle. With Melbourne Uni jostling for a spot in the Top Four and coming off a solid six weeks of great form, the first quarter was a tightly fought arm wrestle.

The Mugars started with the swirling wind, which took some adjusting to for both teams as players found it much more difficult to hit their targets by both hand and foot. The Falcons controlled use of the ball set up their first goal where Jane marked in the goal square and slotted through the first major of the day. The Mugars took advantage of the wind next and spotted up a target in their forward line who converted, somewhat questionably. The goal umpire helpfully informed the Falcons’ backline that “if the ball is on this side of the post, it’s a point, and if it’s on this side, it’s a goal”. (So that explains why I’m still in the backline! I’ve been aiming for the big sticks all this time!). Loz was exceptional, creating space and forward entries with her dodging and weaving around the forward fifty. Both sides traded another goal each and went into quarter time (after only 21 minutes!) even-stevens.

Another 21 minute quarter, but with the wind to the Falcons advantage this time and the Falcs put their foot down, piling on five goals and keeping the Mugars scoreless. The Falcs continued to work on their game style and starved their opposition of opportunities. Nic’s work was fantastic at the stoppages with her creative yet controlled ball movement into the forward line. First gamer Daisy Pearce looked like a star of the future, and was rewarded with a couple of goals for the afternoon. Someone make her a Wikipedia page.

After half-time and with the wind still a factor, the Falcons were eager to quell the Mugars attempts to peg back the lead. The Falcs did well to continue to forward-press and were rewarded with a goal. The Mugars however, finally found some freedom and with some fantastic long kicks into their forward line, found the space to kick three goals for the quarter.

With the wind advantage in the last quarter, the Falcons didn’t take a breath and continued their patient use of the ball to set up shots on goal. Hammo’s opponent continued her idiotic name-calling from our last encounter and essentially BROKE ALL THE RULES OF FEMINISM. Hammo responded by putting in a dominant, best-on-ground performance and kicked a monster goal from the coach’s box. Despite the Mugars third quarter surge, the Falcons persevered with their game style and ran out the game 33 point winners.

The Falcons put in a relentless performance on a swirly day at AH Capp Reserve in the lead up to finals. The team got off to a great start and the beginning of a dominant performance by Zachy who kicked her first goal of the game against the wind. The Falcons used the ball well providing forward line opportunities but unfortunately not always hitting the target. Spanna and Til were excellent early on, setting the tone for the game. Til was rewarded with a free kick on the fifty metre arc, where she kicked to the top of the square and Zachy was there for the crumbs and her second goal. The Mugars began to apply more pressure, but the Falcs continued to persevere, pushing forward and creating more opportunities into the strong wind.

After quarter time, the Falcs were keen to take advantage of the wind and with instructions from Bec and Tory to kick long and work hard to make the most of the wind advantage. Bec led by example and kicked a goal from the centre square. Spanna and Layna took challenging, contested marks. Spanna’s hard work was rewarded with a 25 metre penalty which took her to the forward-arc where she hand-balled to Tory who nailed the goal. With the Falcons dominating the contest and the Mugars’ pressure dissipating, Zachy kicked her third major for the game. Shortly followed by her fourth. And fifth. Layna was solid as always across half back and the Mugars couldn’t enter their forward 50. Zachy kicked her sixth, with Taz, Bec and Tory doing the inside work.

After half time, the Mugars regained their focus and applied more pressure to the surging Falcs. Soxy was excellent in the ruck all game, and Taz’s shepherding and protection gave her teammates, especially Tyndall, the time and space to get to the ball and make smart decisions. The Mugars pressure made it difficult to clear the footy from their forward line, but the Falcs backline finally managed to clear it out to kick another goal.

The Falcons started strongly in the last quarter with Zachy clearing it from the middle. Rechelle made an impact with her fantastic kicking, either centering the ball into strong targets, or clearing the footy into space and to the advantage of her teammates. The Falcs dominated possession in the final quarter and kept the Mugars scoreless. A fantastic effort by the team in swirly, challenging conditions. Thanks to their strong win, the Falcons regained top spot on the ladder by 0.39%