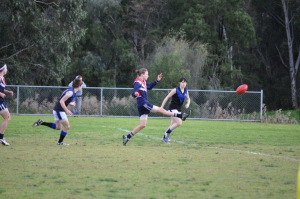 Darebin Falcons vs St Albans Spurs vs The Wind On a blustery day at Kings Park, the Falcons Reserves took on the Spurs. After only sneaking away with a 7 point win in Round 4, the Falcons knew it would be a tough game on the Spurs’ home turf. The Falcons started with the wind and won plenty of the ball but the difficult conditions and pressure from the Spurs prevented either side from breaking free. Finally, Bec found Matty in space, twenty metres out, and Matty finished perfectly, scoring her first Falcons goal.

Shaz snapped a great goal on a tough angle and soon after, a composed Gemma spotted up Taz in the square, who converted in her first game back. The Falcons went into the second quarter four goals up. After the break, the Falcons attacked immediately, with Taz chopping off a definite St Albans mark in the forward fifty and spotting up Shaz, who then converted on a 45-degree angle into the wind. Alanna found space on the wing and took strong marks- even taking a bounce- and pushed the ball forward. The Spurs however, took advantage of the wind and kicked a goal that dribbled through over the back of the pack. They followed up with another, which was helped through with Hammo’s generous interpretation as goal umpire.

The wind continued to swirl and the Falcons opened the half with a huge set shot from Taz, who had been fed the ball skillfully by Cassie (who, in her first game back, was then collected as a thanks for her trouble). Despite having a lot of the ball in the Falcons’ forward line, the Spurs ran the ball out of danger too easily. Cassie patrolled the half forward line and continually chopped off the Spurs’ attack. When the ball finally entered the Spurs’ forward line, Kerro applied a huge tackle in the goal square, and was rewarded with a free. Layna, who ran hard all day, roved the ball off the pack in front of goal and converted.

The last quarter began with Trashby attacking the ball with her usual vigour and clearing it out of the pack. The Falcons had plenty of the footy in the first few minutes but couldn’t manage a goal. St Albans took advantage of the wind and managed to press forward; however, the Falcons backline, led by Roi, applied plenty of pressure with hard tackles and smothers. Harry, who battled hard all day, continued to attack, putting in multiple efforts. St Albans finally managed a quick goal after a kick-out; however, the Falcons held their ground, except Harry, who instead performed acrobatics. To finish off, Taz, with the help of Layna and others, were rewarded with a free for holding the ball in the attacking fifty. Taz quickly booted it forward where Bec roved the footy off to Nik, who soccered it through. Great effort Falcons! A well deserved win in difficult conditions. And well done Jane on her first win as interim coach!