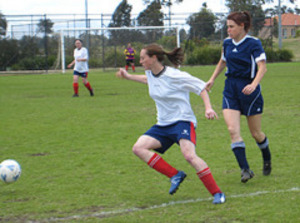 For a full match report on this weeks soccer,

The Falcons soccer team travelled to Bulleen on Sunday to play under floodlights on an excellent artificial pitch, all that was missing were the vuvusellas! Unfortunately the evening kickoff ended in a lost for the team. Darebin took to the field with new Falcon Sina Pankoke (originally from Germany)making her debut.

The pitch offered an opportunity to play attractive football and Bulleen started the stronger scoring 3 goals before Darebin had adjusted to the fast pace of the ball across the artificial surface.

The 3rd goal fired the Falcons into action and some skilful play through the middle up to the strike force of Jo and El resulted in the forwards scoring two goals during an exciting 15 minutes at the end of the first half. Darebin went into the halftime break 4-2 down. The second half saw further goals scored for Bulleen and a disappointing final score line of 8-2.

Next week the Falcons are at home to Fawkner at 1pm.