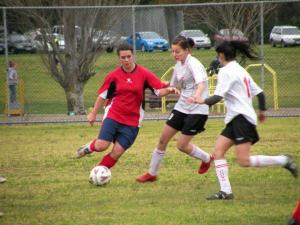 It was a bad-tempered game against opponents who appeared to be venting their frustrations of a winless season by trying to kick the Falcons out of the game.

The visitors maintain their composure for the most part, however, led by midfielder and co-captain Nicky Leitch who netted a hat-trick.

Leitch and Lauren Proudfoot were finding plenty of room in the middle on a big pitch and covered plenty of ground to make up for the absence of the injured Caroline Monk.

Darebin should have had a penalty in the opening five minutes when striker Jo Rooney was taken down the box but the referee waved away the claims, setting the tone for a controversy-filled match.

The Falcons kept pressing and Leitch slammed home her first from close range before Ang Mackie, enjoying a run at left wing, made it 2-0.

Striker Kathryn Sparks was receiving some rough treatment at the hands of the home defence and, after she was tackled from behind 25m out, Leitch got her second with a free-kick that gave the keeper no chance.

The pattern continued after the break, with Sparks and Proudfoot receiving yellow cards for showing their frustration at the referee’s lack of action against Western Suburbs’ tactics.

It was still all Falcons, though, Rooney heading home Sparks’s pinpoint cross to make it 4-0 and Leitch completing her hat-trick to seal an impressive win.