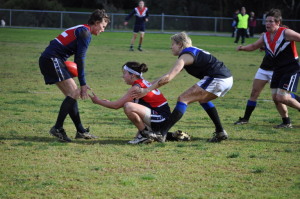 With 4 of the two’s stars out it was going to be a great opportunity for others to step up.

Played in very wet conditions old fashioned wet weather football was on the cards and it was a hard slog, the Falcons washing machines will never be the same.
Tracey Mitchell played her best game of the season running, tackling and setting up team mates, her hardness at the ball was an inspiration to the side.
Jenna Hubbard, Kristy Carbis, Crystal Peyser and Michelle Gadd all stepped up and played great games.
It was a great team effort that really pushed the falcons for all of the 4 quarters. Melbourne Uni turned up ready for a good contest, with a depleted side due to injury a contest is what Darebin had.
The game was a great opportunity for the girls to play under pressure but all the girls stood up and showed why Darebin are at the top of the competition. The second half was a bit more free flowing and we found our way to goal a little bit easier.
The last quarter was a well fought out contest with Melbourne Uni pushing Darebin until the last siren.
Well done to Tammy, Bec and Carbs for coming up and playing great games. To Coutta for a lack of a bump ( could have put her on her ass)
To Chinny for a knockout punch to her face.
To Hammo for manhandling the umpire.
Speacial mention also goes to friendly fire from Jano who pinballed the footy into Daisy then Hickey and into Hammo’s Face. A tough match for both teams against St Albans away next week.