Congratulations go out this weekend to Ash ‘Dash’ Damiano who will compete in her 100th game of football. 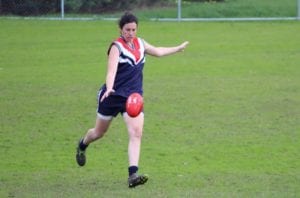 Ash started playing footy at Lalor in 2006 and played until they folded in 2012. During her time at Lalor she was runner up best and fairest and in the leadership group.

Dash then moved to the Falcons in 2013 and is now in her third season where she has become an ever reliable member of the backline. The Falcons wish Dash all the best for her 100th game.