We’ve had a fun and successful 2017 Auskick program with 25 girls registered between 4-12 years of age. The girls have a few more sessions to go and we will be looking to grow the program again in 2018. Our new girls AFL junior programs this year has been a success! The girls (and coaches) have had a ball and keep improving each week. Numbers continue to grow even with just a few games left in the season.

With the guidance of VFL / AFLW player and Physio Brooke Patterson, we introduced a strength & conditioning warm up to the U10’s girls routine, with the goal of eliminating the risk of knee injuries and making the warm up a habit which the girls continue through their football career.

The U14’s have kicked off a mentoring program partnering players with a senior Falcons player mentor to catch up and talk about footy, life and set goals for the future.

In 2018 we will expand our junior AFL program to offer U12’s girls AFL, so start spreading the word to potential AFL Falcons! The NFL U18’s, Division 1 and Division 2 leagues all only have a handful of games to go, so get along and support the girls! Check out the full fixtures for all teams here: https://falcons.org.au/index.php/afl-fixture 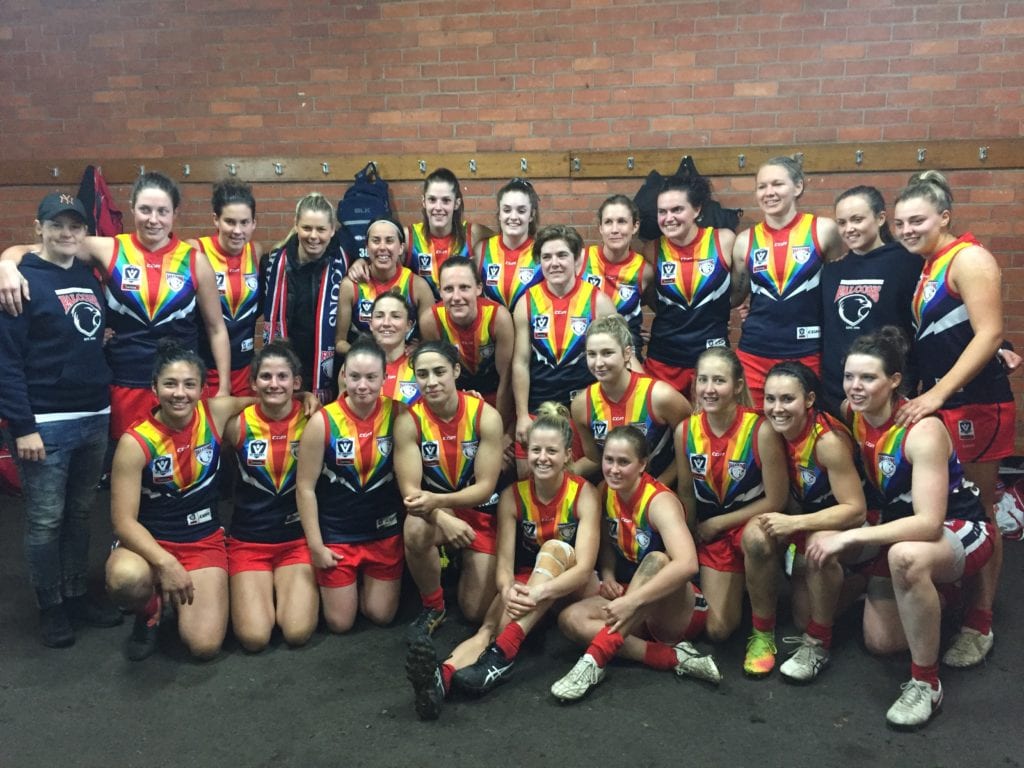 After nine rounds, the VFL side are currently sitting second on the ladder with seven wins and two losses. With the recent return of experienced players such as Aasta O’Connor, Lauren Arnell and Daisy Pearce plus the addition of the Adelaide Crows’ Ebony Marinoff; they are looking to finish the season strongly.

Last month the team also played in a Pride and Inclusion game in Hamilton, country Victoria. This was such an outstanding event, we were honoured to take part in it. A huge thanks to Charles Beaton of Gay that’s Ok and Annie Nolan for their work in funding and coordinating the day. AFL Victoria and Darebin Council have thanked us for being part of the first ever female Aussie rules football pride match in country Victoria. We hope this is a new tradition that continues! Thanks to our wonderful Falcons supporters for helping us reach our target of $8800 to fund new size four training footballs. The Northcote Lions closed out the fundraising target by donating the remaining $1700 this week.