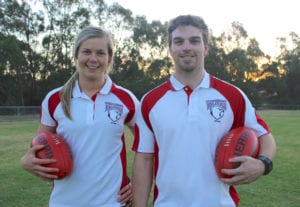 *Has played AFL since 2007 and has been an integral part of every premiership in that time.

2016 will mark Emma’s 12th year involved in women’s football, 10 of which have been at Darebin.

Prior to playing AFL Emma was a basketballer, playing in the CBA & ABA for the Broadmeadows Broncos.

*Future endeavours include completing a Masters of Teaching through 2016-2017

*VWFL Best and Fairest Runner Up 2014