AFL – Around the grounds Falcons are heading in to the business end of the season and both senior AFL teams are looking good, with both anticipated to go deep in to September.

After 14 rounds of the 2016 season our VFL side remains undefeated. Over the last month we have continued to get the results on the scoreboard, however, senior coach Jane Lange believes the team is yet to find its best form.

Despite this inconsistency, the team keeps finding ways to win which speaks volumes of the character of the playing group.

“Everyone has a will to win and not just the game, they want to win the contest and they want to win the quarter or the half. So when things aren’t going well, in terms of maybe tactically, it probably comes down to the grit and determination of the group that we’ve got.” Lange said.

Another feature of the VFL side’s season has been the opportunities we’ve been able to provide to the full list of 30 players.

“We’ve had a good spread of girls who’ve had the opportunity to play up (in the seniors) and also within that, had opportunities to play in different positions and see what they can do for us.”

Meanwhile, our Division One side is currently in second place on the ladder after 10 rounds. The confidence of the team has continued to grow as the season has progressed, much to the delight of coach Grant Hammond.

“What’s exciting about the way we’re playing footy in Division One is that we’re coming together as a team and we have certainly improved in our skills. The players are starting to look for each other more and more and of course we’re getting the results on the scoreboard.” Hammond said.

A number of players have also had consistent form rewarded by being given the opportunity to play in the seniors.

“As a reserves coach, I’ve always said, it’s exciting to see a player achieve that and get the recognition to go up and play in the seniors… and if they do happen to come back (to the reserves), they’re just walking that much taller because of the learnings that they get.” Hammond said.

Something that both coaches agree on has been the outstanding attitude of all players, no matter which team they are playing in.

“Certainly, whenever girls have gone back and played in the reserves, they’ve worked on specific things and generally being positive about that experience of getting their hands on the footy and then coming back into the seniors.” Lange said.

Similarly, Hammond has seen the positive impact that senior players have on the Division One side.

“Players that have come back, their attitude is great. They encourage and help the girls that are in Division One and that’s been a huge tick for me as a coach, that they carry no attitude they just blend into the team and help the team.” 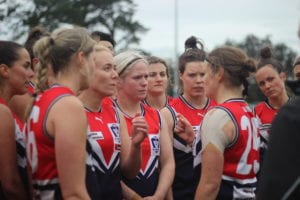